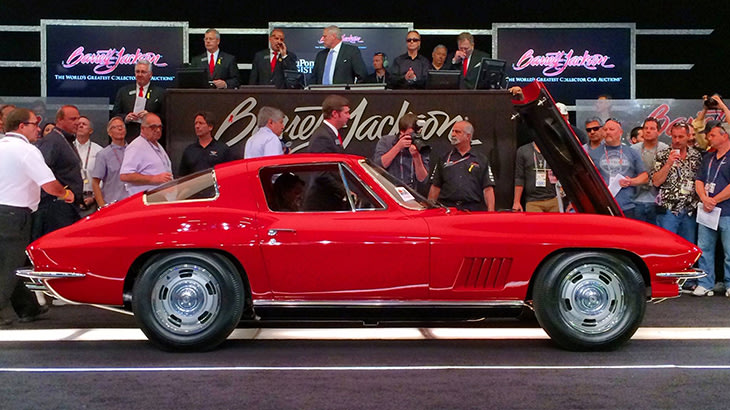 What made this L88 Corvette so valuable?


To understand that, you first have to understand what the L88 Corvette was, and that was a pure breaded race car. Rated at 430Hp, dyno test proves that number was underrated. Some where around 560Hp was more like the real horsepower rating. The underrating was a deliberate attempt to keep with-in safety regulations imposed by the government.


There were only 20 L88s built in 1967, making them some of the rarest production Corvettes every made. But the one that rolled across the block at the Barrett-Jackson Auction was a one-of-kind. Ordered by a GM executive for his sons friend, it is the only documented '67 L88 with Red-on-Red (Red Exterior - Red Interior) to come off the assembly-line.

What makes it even more rare is the original condition of the vehicle and the condition of the documents. The tank sheet (order copy) which is accessible by dropping the gas tank is surprisingly legible and had all of the correct information that indicated its true L88 fully optioned status.

The GM/NCRS Document Validation Service approved of the documentation and awarded it the prestigious "Top Flight Award" in 2011. It also went on to collect three other prestigious accomplishments: "Duntov Mark of Excellence," "Bloomington Gold Hall of Fame" and was approved in the "Bloomington Gold Special Collection."

This particular Corvette was a two owner car. It spent the first two years of its life racing at Dragways like Detroit, Motor City, and Lapeer in Michigan. And then in 1970 it was sold to its second owner, a teacher who thought he was just getting a regular Corvette. But while doing a brake job one day he realized that the car had unique dual-pin calipers only found on the J56 option which came with the L88. This discovery promoted him to drop the gas tank and seek out the tank sheet where he discovered he had purchased one of the rarest Corvettes that was every made.

After a few more owners, this car finally made its way to the auction block on Saturday afternoon. The Corvette will have a new home, probably a garage somewhere where it will be put on display. Due to the rarity and the amount of money it cost to own this car, I doubt it will ever see the road or any racetracks, but it will probably see a lot of car shows.