If shopping for the perfect car that has everything you want - the right color, wheels, accessories and more - becomes too tedious of a job for you, then Chevrolet has something new you might find fun and interesting.

The new 2019 Chevrolet Camaro Online Configurator is a way to build your dream Camaro without leaving your house. Using Chevrolet's configurator located on their website, you can get a 180-degree visual of what the exterior and interior of a particular Camaro will look like based on the options and configurations you choose. You will also get a net price of what the Camaro will cost and a location to the nearest dealership that has a Camaro on their lot that has all the bells and whistles you're looking for.

There are not too many big changes to the new Camaro, but a bolder, stronger looking front end will be added to the already menacing looking sports car. The Camaro LS, LT, and RS models get a new front fascia that is a little sleeker looking whereas the Camaro SS front end will receive a bigger front fascia somewhat resembling the Silverado's new bold look.

The four-cylinder turbo trim models, including the new 3LT trim model, will offer you a more sophisticated, custom 1LE suspension option. Although not your big engine Camaro - pumping out 275 horsepower and 295 lb.-ft. of torque - you can still have a lot of fun in these four-cylinder sports cars.

New Pricing
The Camaro 1LS will drop from $26,900 to $25,995, while the Camaro 2LT will drop approximately $3,000 from last year’s previous price tag. Since the Camaro has fallen behind the Mustang and the Challenger in terms of sales, Chevrolet’s sales strategy is to focus on lower prices for high-volume Camaro trim models. 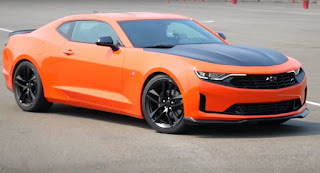 One last surprise the 2019 Chevrolet Camaro configurator lets us in on is the “Crush” orange exterior paint option will again be available. This color made its last debut on the 2017 Camaro alongside the Camaro Hot Wheels 50th Anniversary special edition vehicle.

Corvette C7.R To Race In China For The First Time Ever What’s Chevrolet's latest move to increase sales for the Corvette overseas? Bring their coolest Corvette they have to race at places they haven’t raced yet.

Corvette will close out the 20th season of FIA World Endurance Championship (WEC) with its first-ever factory-run race in Asia. The Corvette C7.R Redline special edition will run the 6 hours of Shanghai on the weekend of November 16-18.

The Shanghai International Circuit is a venue that offers 16 turns in 5.45-km (3.38-miles) per lap. Like all WEC races, this track is designed to test the vehicle’s speed, endurance, stability, fuel economy and, of course, the driver’s skills. Built in 2004, the motorsports venue already host many racing championship circuits including the Formula One Chinese Grand Prix.

“Corvette Racing has proven itself as a world-class racing program,” said the Chevrolet director of Motorsports Competition, Mark Kent. “Competing in the Shanghai race provides us with an additional opportunity to test ourselves against the top manufacturers and teams in the FIA WEC.”

Chevrolet's decision for making the move toward racing the Redline edition Corvette C7.R instead of the tradition yellow and black C7.R is because of their plans to sell the special edition Corvette in China and other countries in that region.

The Redline edition isn’t just limited to the Corvette. This special edition trim was first introduced at the 2015 SEMA Show and is implicated on select Chevrolet trucks, SUVs, sedans, compacts and sports cars. Some of these other special edition models will join the Corvette in the overseas sales campaign.

Scott Lawson, general director of Chevrolet for SAIC-GM tells us, “Chevrolet plans on strengthening their brand in China by boosting their product lineup and their overall customer and ownership experience. We have been rolling out more youthful and sportier Redline editions to help reach younger customers, the ones that are most likely to branch out and buy a sporty looking Chevrolet.”

Either way, global exposure and sales will keep profits up and stock prices steady if not rising.
Posted by Brian at 9:10 AM