In January of this year, a 1967 L88 Corvette showed up on the auction block at the world famous Barrett-Jackson auto auction. This '67 L88 was specially built for a General Motors executive and was produced as the only known L88 from that year with a red-on-red color combination. It was in such good shape with paper work to match it fetched $3.8 million.


The stipulation of that Corvette is much the same as two Corvettes that will be rolling across the auction block at the Mecum Auto Auction (Houston, April 10-12, 2014).

The first Corvette that might fetch some big numbers is an one-off 1963 Corvette Sting Ray convertible styling car that was built for General Motors Chevrolet Division General Manager Semon “Bunkie” Knudsen. Now owned by his son, Bernie Knudesn, this rare Corvette stands out from the rest with huge, unique chromed out side-pipes, on a special Crimsom Firefrost Metallic red with white strips. The interior was modified from the factory with 1964 interior components and styling. The seats were covered in Naugahdye and were chic-white with maroon stripes.

Underneath the hood is a 327 cubic-inch motor with plenty of chrome plating and crinkle black finish to take the place of the cast-iron look.

“All of Knudsen’s cars came in this color, and I’m sure he was out and about showing it off often,” says Mecum consignment director John Kraman, who says that this car could reach the $1 million mark. “It’s a real automotive landmark that has special panache.”

The other Corvette that will probably fetch some big numbers was so pampered it has never even hosted a passenger, and there is only three known people that have ever sat in it. This 1967 Corvette Sting Ray that only has 2,996 org. miles on it is so nice it probably belongs in the Corvette Museum in Bowling Green, Kentucky.

It has only had one owner, who passed away in 2011. Don McNamra was a United State Marine, he struck a big payday in Las Vegas where he took his winnings and bought this '67 Sting Ray. McNamara lived in Colorado Springs, he never married and lived a very private life. At one point, sometime during the '80s, he denied even owning the rare Corvette to keep a low profile. Legend has it that the small amount of miles on the vehicle were mostly put on during late night cruises.

These Corvettes may not bring a $3.8 million price tag like the Barrett-Jackson L88 Corvette, but they could easily be some of the Mecum's highest auctioned cars of the weekend, maybe even of all time. One thing that will hurt the Corvettes is that the Mecum auto auction doesn't bring in as many high-profile bidders like the Barett-Jackson auctions often do.

“It’s a great color scheme (white with a red stripe) and must be the absolute best second-generation Sting Ray in the country,” says Kraman, who believes this Corvette could also see the $1 million mark. “The first thing that jumps out at you is how different an original car feels from a restored one. This is what it must have looked like in the showroom, down to the whitewall tires.”
Posted by Brian at 5:53 PM

The GTO Judge goes back a long way, all the way back to the muscle car era. After being dropped out of production in 1974, the GTO was just another muscle car that didn't survive. But Pontiac brought it back for 2004, '05, and '06 before dropping it again due to marketing issues and poor sales.

Like with the Trans Am, the GTO Judge still has die-hard fans who still want to see vehicles produced with the famous badges and colors that we all know and love.

Two brothers, Tod and Scott Warmack and Jim Dowling from Tallahassee, Fl. felt the same way about the Pontiac brand. So with the same love and respect that other Pontiac fans had, they started up a Trans Am program ran from their Tallahassee shop known as the Trans Am Depot. To this day they are the only company that is allowed to use the Trans Am moniker.


The company started creating awesome versions of what the Trans Am would have looked like if they were still in production today and then sold them. Needless to say, they looked great and made a big hit. Now the Trans Am Depot is venturing out into the business of making a 2014 GTO Judge or what the Trans Depot calls it "6T9 Goat."

Just like with the Trans Am, they will be mocked up by using the '10 Camaro frame and body. Different bumpers, quarter-panels, hoods, spoilers, rims and interior styling, as well as other components, are implicated to differentiate the GTO Judge from the Camaro and Trans Am.

What do they have for power?

The GTO will get a supercharged 600rwhp, 600lb-ft of torque LS3, with 12 pounds of boost and SLP long-tube headers.

The 2014 GTO Judge and Trans Am are available for order, just contact the boys at the Trans Am Depot and get your dream car started.

If you have already ordered your Corvette Stingray you are safe from the price jack, but if you have been sitting back and waiting for the right moment you can now expect to pay an extra $2,000 for the good looking, great selling sportscar.

General Motors decided with such great success so far selling the beauties it was time to try to squeeze a little more out consumers. The Stingray coupe will move from $51,995, including destination, to $53,995. The convertible gets a similar price jack, from $56,995 to $58,995.

March 1st is when the change took place. A spokesmen for Chevrolet has confirmed that there is no need to worry about any orders purchased prior to that, as they will honor the original price even if it has not yet made it into the owners possessions yet.

Corvette is still on the top-ten fastest selling vehicle list of this winter according to  cars.com. Even with the $2,000 increase, one can only image that this will have no effect on sales. The redesigned 2014 Stingray has been a hit every since its debut at the 2013 North American Auto Show.

Even with the $2,000 price jack, the Stingray still puts out performance and comfort with a price tag that can not be matched by any other car on the market.
Posted by Brian at 10:25 AM 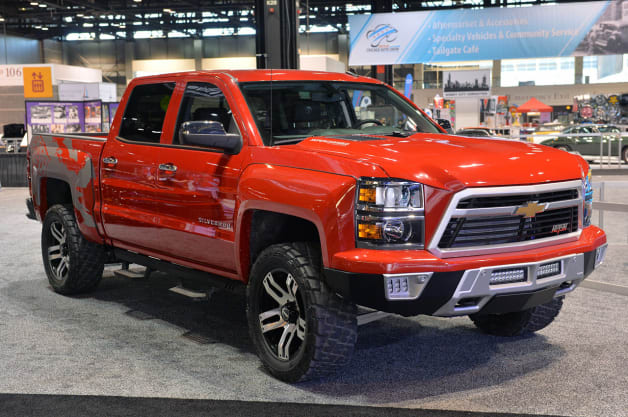 The Lingenfelter and Southern Comfort Silverado --

Originally started as the T-Rex, Lingenfelter gave the Silverado the name because the truck was designed to go head-to-head with the Ford Raptor. And the hope for the T-Rex was a Dinosaur square-off that would eat the Raptor alive.

But when Ligenfelter found out that Southern Comfort Automotive was also doing a similar project, the two joined forces and the name was dropped to make way for a more marketable name, the Silverado Reaper.


The Silverado Reaper made its first debut at the Chicago Auto Show, where its larger than life presences was immediately notice. The beefier hood was designed to fit two different massive power-plants: A 5.3-liter with 475hp and a 6.2-liter with 550hp, both of which are topped with Magnusom supercharges and fitted with Corsa exhaust.

The Suspension is lifted 3-inches over stock and Fox Reservoir Shocks that provide 9.2-inches of wheel travel in the front and 11.2-inches in the rear are bolted on.

Two sets of rims and tires will be available. 20-inch rims and tires are standard, but for the real off-road enthusiast you can order 17-inch beadlock wheels with 33-inches of General Grabber rubber

This new beast will be available at select dealers this month. Price has not yet been released but roomers have it that a price tag will be around $50,000 to $60,000 depending on options.