2014 Corvette Stingray: Too Fast for the Price 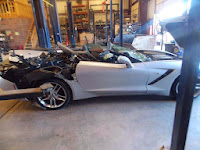 These are just a couple of Stingrays that fond their way into a wreck.

Big bank rolls with no driving skills -- cloud your new Corvette Stingray end up looking like these?

Has General Motors put to much power into there new Corvettes?

Lets face it, if your someone who has enough money to buy a special edition Corvette ZR1 or a supercar like a Lamborghini or a Ferrari, most likely you will set that

car in the garage and look at it, show to your friends -- but drive it around every day -- that probably wouldn't even be an option.

But with the Stingray being priced reasonably -- a price about the same as last years Corvettes -- these cars will be finding their way to the roads of even the most average Joe cities. It could be scary.

Expected to be released in early spring - 2014, the Z/28 may be one of the best road course cars for the price tag it will have taped to the window. No exact number yet, but the price is expected to be right around the same amount as you would pay for one of the other performing Camaros that Chevy has in it's line-up.


The latest trip to the most grueling road course in the world, the Nürburgring, the Z/28 laid down numbers on a damp track that beat not only it's sibling, the ZL1, but also the Porsche 911 Carrera S and Lamborghini Murcielago LP640.

The Camaro boasted a 7:37.40 lap time and Chevrolet believes that the time could improve by as much as four seconds depending on weather conditions. Not only was the track damp but toward the end of the lap it started to rain.

This was a 24 hour test for the Camaro, so not only did it run this one lap to impress, but it also ran for 24 hours with breaks only to accommodate the the tires and brakes. A a test of endurance that Chevrolet has been doing to their sports cars since the early 1990s when their fastest car was a 300hp Corvette.

300hp sounds quite soft apposed to this Z/28 that brings a 505hp 7.0 liter engine to the table. That power helps it get around the track as fast as it does. But Chevrolet claims the real secret to it's fast times is the frame that is 300 pounds lighter than the ZL1. The combination of horsepower and lightness gives the Camaro the ability for more efficient braking going into corners and faster alliteration coming out of corners.

These cars are race ready - you can order a radio and an air condition for the Camaro, but Chevrolet has claimed they will not be standard. Regardless it's a peer race car ready for the track right off the showroom floor.

General Motors is known for being the last out of the gate when it comes to styling of their mid-sized sport/luxury sedans. There also known for catching up with the times when they get around to it.

Instead fixing the problem they usually make up the difference by slashing prices and offering incentives. But this time around, with GM doing as well as they have this past year, and also with GM stock holders not wanting the short cut that GM usually takes - GM will take a new approach.

Instead of waiting for a couple of years and then promoting a refresh version of the car right before they offer a all-new redesigned Malibu, like they would usually do - GM decides to refresh now, sooner-than-later. A refreshed model of the 2013 Malibu has been designed and will make its way to the showroom floors in early 2014.

With new exterior styling including a stouter front clip, redesigned front seats to help add room to the back seats - which was a big complaint for consumers, more trunk space and some engine up-grades that include the stop/start technology system and better gas mileage for the base 2.5 liter motor (25 city and 36 highway) - GM hopes this Malibu will compete better with its competition - especially the Ford Fusion and the Toyota Camry which is in the same class as the Malibu, but did much better this past year in sales.

Although the Malibu is not completely redesigned - as GM would call it (refreshed), it will unusually receive the complete and full advertising push. This treatment is usually only reserved for all-new redesigned models, but with GM doing as well as they have with their other models - such as the new Sileradro, Impala, Cruze and their Cadillac line - GM wants nothing to do with a dud in their line-up.
Posted by Brian at 8:12 PM

Self Driving Car: General Motors is Close and Ready

The Question is Are Drivers Ready?

http://www.youtube.com/watch?v=0HySnLN9Pk4  watch video
Drivers really don't need another reason to not pay attention on the road. But a ventrally you will be able to slide behind the wheel and hit the gas on the Cadillac SRX test vehicle with "Super Cruise" and it feels like any other luxury SUV. However, when you hit 50 mph it feels different.


At that point, you hit two buttons on the steering wheel to activate Super Cruise, you position the SRX in the lane and take your hands off the wheel. After that, Super Cruise takes over.

"It's a pretty remarkable feeling isn't it?" asked Eric Raphael, manager of the General Motors Super Cruise program, who sat in the passenger seat next to me.

As we zipped around the GM test track in Milford, Mich., I was in the driver's seat but my hands were off the steering wheel and my feet didn't touch the gas or brake.


"Some of this technology, like adaptive cruise control, is already in some Cadillac models," said John Capp, GM director of electrical systems. "Our plan is to have the whole system available by the end of this decade."

General Motors has been working on autonomous drive technology for years. Some of the technology has gone into features like adaptive cruise control, which automatically starts braking as sensors detect your car is closing in too quickly on the car in front of you.

The next frontier is developing cars that completely drive themselves. "There's a lot of momentum with this technology. Nobody wants to be left behind," said Raj Rajkumar, professor of electrical engineering at Carnegie Mellon University in Pittsburgh. "In 2003, if you'd have said that someday we'd see self-driving cars, you would have been labeled 'insane.'"

The crazy talk ended when everyone saw the Google car safely tooling around on public streets with researchers from the tech giant not steering or controlling the car.

Since then, nearly every automaker has proclaimed their intention to build self-driving cars.
Nissan and GM said they'll have one by the end of the decade. Elon Musk is shooting to have a Tesla with "co-pilot" technology to assist drivers by 2017.

"This technology is all very natural, very incremental, but it is coming," said Rajkumar.