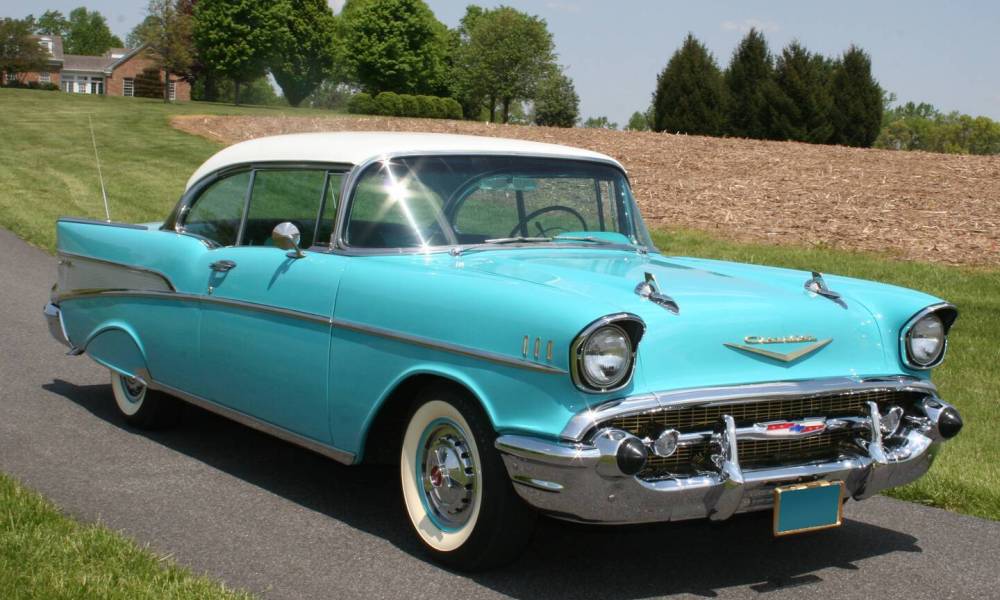 How Did the 1957 Chevy Come About?
It starts with Chevy's need for change. For the first time since 1918, the car company was willing to offer a V-8 in its 1955 version, and with that V-8 they thought it would be a good time to get rid of the shoe-box look that they were recently using and try something different. Chevy Chief Designer, Ed Cole wanted to get rid of the shoe-box look by 1956 and have a whole new look for 1957. Unfortunately things did not go as planned; the new look never launched and they would have to make due with the shoe-box style for one more year.

To help differentiate the '57 from its predecessors, Chevy decided to make some changes, changes that would prove to be what some people at the time would call a mistake or bad marketing, but in actuality would end up being called some of the best craftsmanship a GM vehicle ever received.

Change is a Good Thing
Some of the changes were: A new dashboard, a reshaped windshield, sealed cowl and 15-inch rims to replace the 16-inch rims. Also Chevy designers relocated the air-ducks to the headlights which gave the car the distinctive big bold chrome look in the front. And then they added the iconic quarter-panel fins to the rear to help make the Chevy six-inches longer, ultimately giving the Chevy the lowered look that everyone recognizes today.

Other intriguing things that were new with the '57 were a lighter front-end, a bigger engine bay and new drivetrain options that included a fuel-injection system and a three-speed hydramatic transmission. A duel exhaust was offered with all of the V-8 options for a little more horsepower but more so for the cool sound that it would give the Chevy. In commercials, magazine ads and on billboards – Chevy's motto was always the same: "Chevy's Put the Purr Back into Performance".

A 1957 Chevy for Everyone
Different trim options helped make the car more affordable for the average family and classy enough for those who wanted the feel of something a little more luxurious.

Each version was available in a two-door or four-door frame. The base "150" series with an in-line six was not only priced very well for consumers on a budget, but also did very well when it came to gas mileage compared to the V-8s. As you went up in models you went up in comfort and class, but you also went up in price. The Bel Air and Bel Air convertible was the most popular and expensive models, and in today's market it is the most wanted by all collectors and car enthusiast.

Option Up
Each version had options that could be ordered up to make the car more comfortable and luxurious. Air-condition, power brakes, power steering, a padded dashboard, power windows and power seats were all available and offered as options. Also, a signal-seeking radio with a power antenna could be purchased along with a separate speaker that could be placed in the back, and at the time was called surround sound. The "automatic-eye" was another new option. This device would be attached to your dashboard and could detect on-coming traffic and dim your headlights automatically.

One of the things that may have made the '57 Chevy so desirable was the bigger engine bay it came with. This was important because it made room for the big-block engines that Chevy was making for racing at the time. As drag racing became more popular and going fast was the thing to do, having a '57 Chevy that could accept Chevy's big-block engines with virtually no fabrication required was a huge plus to the go-fast racing enthusiast.

Even without the big-blocks, you could still make plenty of power by opting for what Chevy called the Power-Pack (283 cubic inch engine with solid lifters, a 4 barrel carb and dual exhaust) which would make 275 hp right off the showroom floor. Even though the 283 cubic inch motor would make 283-hp with fuel-injection, that option was often over-looked by consumers at the time because very few people knew how to work on fuel-injection setups, even mechanics were having problems working on the new fuel-injection system. So, if you were buying the car to modify it and or race it, the Power-Pack option was a much smarter way to go.

The odd thing about these desirable collector cars is in 1957 the sales of Ford's '57 model ended up out-selling the Chevy. Maybe it was the 1957 Chevy's bold chrome front-end or the rear-fins that threw consumers off. Maybe it was the introduction of the fuel-injection and the 3 speed hydramatic transmission; both of which consumers were skeptical about. Whatever the case was, by time the '80s rolled around these were considered one of the most, if not the most, collectible cars around.

Worth Every Penny
Nowadays a meticulously restored '57 Bel-Air can go for around $100,000.00 or more, and a seller could catch even more for a convertible in the same condition. But if you are thinking about buying one, you will want to be careful and maybe even seek some professional help before doing so. There are a lot of replicas out there and it can be very easy to be fooled.