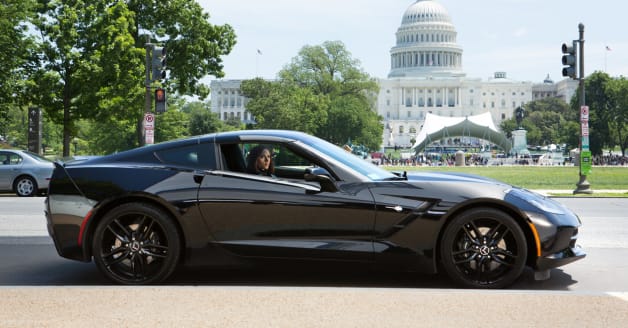 The amazing looking and performing Corvette Stingray scored a side job for early this spring. It will play host to a Superhero S.H.E.I.L.D agent Natasha Romanov (Scarlett Johansson) in the new movie Captain America: The Winter Soldier.

You really couldn't choose a better car for an American Superhero, especially considering that the Corvette Stingray itself is somewhat of an American Superhero. Since its unveiling at last years Detroit North American Auto Show it has taken the auto industry by storm with nothing but rave reviews, following those reviews up with the car of the year at this years Detroit Auto Auto.

Those honors are what could have helped Marvel Entertainment make the decision for using the Stingray in the up coming flick. No word yet if there will be any aftermarket up-grades done to it for the movie, but one can only speculate that even if there isn't any up-grades made for its movie debut, that the black-on-black beautiful will still be more than enough to impress movie goers.

If you want to catch a glimpse of the Black Widow before you see it on the big screen, you will have your chance in Chicago when they host their Annual Auto Show.

Although it seems that there will be no special edition Black Widow Stingray offered to the general public, Chevrolet will be producing a special edition comic book to celebrate the teaming-up of Chevrolet and Marvel Entrainment, LLC.