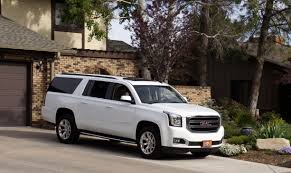 Who says a 6,000+ lb SUV that can carry seven-passengers and or can offer you a crazy amount of cargo space has to be sluggish when it comes to performance. The guys at Hennessey Performance Engineering definitely don't believe in that thought and that's why they decided to come up with a package for the 2015 GMC Yukon Denali XL (extended version) that proves a huge point.

When the Hennessey HPE650 performance package is applied to the Yukon's 6.2-liter EcoTech Supercharged V-8 it's pumps out a monster 650-hp. Now that 650-hp is not just designed for hauling the family around town or towing things, it's designed to go fast as well. In fact it performs so well it gets 0-60 mph in 4.7 seconds while toppling the standing quarter-mile in 13.3 sec. at 113 mph, not bad for a vehicle that size.


With that kind of power you don't ever have to worry about your big SUV having troubles getting in-and-out of traffic even if you were to be towing something that is quite big, like a RV. You get all the comforts of a SUV on the inside, but the power capabilities of an up-scale four-door sedan that's designed to go fast. The Hennessey Yukon is just a great combination of power, comfort and versatility.

The cool thing is that Hennessey Performance has packages for the Cadillac Escalade and the Chevy Suburban as well. So if you're driving an Escalade, Suburban or a Yukon Denali and you think you could use a little more power under your right foot, a Hennessey HPE650 performance package will give you more than enough power to tool around with.

In 2004, Cadillac came out with their very inconspicuous V-Series Cadillac. Not to many people knew too much about it until it started breaking records as the fastest luxury sports sedan in the world. Breaking records at places like Nürburgring raceway and on the quarter-mile made it clear it was not just a prettier version of the CTS.
Every since the third generation CTS was introduced in 2013 as a 2014 model, we have yet to see a V-Series Cadillac. But after a 2 year hiatus, Cadillac has the new generation CTS-V ready to be introduced to the world at the North American Auto Show in Detroit. It will be introduced as a 2016 model, and with all of the speculation that surrounded it for most of 2014, a drivetrain is now confirmed.

For a long time there was rumors of a 4.5-liter twin turbo charge V-6 and probably a lot of hope for one from some people as that would make the Cadillac a quiet, quick little sedan. But Cadillac decided to go with the sure bet, and you can't get much more sure than the 640-hp, 6.4-liter supercharged, LT4 V-8 from the 2015 Corvette ZO6.

This may be a little disappointing to some GM enthusiast. The powerful Corvette motor will be mated to the very well-respected eight-speed 8L90E automatic transmission. But unlike years in the past, there will be no manual transmission offered this time around.

What gives this Cadillac a smooth ride and the ability to hit corners like a racecar is the Magnetic Ride Suspension that GM uses on all of their performance vehicles. Michelin Pilot Super Sports with 9.5-inch wide tires in the front and 10-inch tires in the back also add some help. Slowing the Cadillac down are Brembo brakes with six piston calipers in the front and four in the back.

Just like last time, the world-famous RECARO racing seats will fill the front seat area. Special badges, stitching and trim will be placed all around the vehicle to let everyone know this is not just your average Cadillac. A big mesh front grille, special ventilated hood, rims and much more will help this Cadillac CTS-V standout in the crowd. And no worries, all standard CTS features including technology like Wi-Fi and Bluetooth will carry over to the powerhouse V-Series Cadillac. Look for its unveiling this January in Detroit at the North American Auto Show.