There are a lot of pictures out on the Internet of what we can expect for the future design of the Camaro. Most of the pics are probably just digitally altered images, some might be close to what we can expect and others are just people having some fun.

Although these sketches and blue-prints are just ideals put together by designer Michael McGee while working with GM, they do show what the possible direction may be for a 2016 Gen-6 Camaro.

I think it is time for a new Camaro, Mustang just came out with their new look and people may not agree with me but the two cars are starting to look a lot alike. Almost so much alike they could be built off the same frame in the same factory. It could be just me who thinks this, but it is just about that time to really put some new real design work to the Camaro. 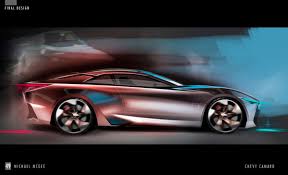 These are all nice pictures of what could or could not be for the new Camaro. Obviously we know pictures like these are over exaggerated, but we probably can expect something like this on a dialed down scale in the future.   http://www.gmhightechperformance.com/hotnews/1312_sixth_gen_camaro_sketches/

Adding to Chevrolet's already amazingly powerful line-up of cars -- the Corvette Stingray, ZR1, Camaro ZL1, Z28, just to name a few -- Chevrolet will be unveiling a new ZO6 this January at the North American Auto Show that they claim will be their most capable track-tested car they have ever produced.

Earlier this year, the 2014 Chevrolet Z28 was taken to the notorious Nürburgring racetrack in Germany and posted times that beat the ZL1 by 4 seconds and even posted better times than the Porsche 911 Carrera S and Lamborghini Murcielago LP640.

So is this Corvette ZO6 going to be better than that?

Chevrolet has been keeping a tight lid of what makes this new ZO6 so special with just a few little photos circling the internet. Whatever it is that's so special about it, there is no doubt that this car is just one more car added to a list of Chevrolet's already great accomplishments this year. And one things for sure, it would be very tough for any car company to compete with this line-up of awesome performing cars.