The entry level 2 door base trim 2015 Cadillac ATS 2 door coupe with a 2.0 liter turbo-4 engine that can put out 272 horsepower will be available this summer for a cool $38,990. It's a new and impressive price to give Cadillac an impressive edge over its competitors.


With more power for less money than the BMW 428i, Audi A5, and the Mercedes C250 – Cadillac may find themselves with some new customers this summer – maybe some already General Motors fans that are looking to move up in class to floss around a powerful Cadillac logo, or maybe they can poach some customers from their fierce competitors, either way it's an intriguing car for a great price.

Although Cadillac threw this number out to the public, they have yet to release a price tag on any other trim options. Still to come for the ATS is an All-Wheel Drive option, six-speed transmission option, 321 horsepower 3.6 liter V-6 engine option and more. Those price options are expected to be announced closers to the release date of the 2015 ATS.


Hennessey Performance has spent more than the last 20 years putting on performance kits that perform on a whole other level for General Motors and many others companies. Recently they have showed off two more of their projects that will be available to General Motors' fans for 2015.

The 2015 Escalade comes with a stock 6.2L V-8 EcoTec3 with 420hp and 460 ft-lb torque. Hennessey changes all that with a supercharged intercooler system with tweaked engine-management software. The 557hp it will then produce is pretty impressive since the supercharger only boast a modest 6.0psi. An optional up-grade for this project is H10 20 inch rims and tires which will set you back an extra $6,950.

Although, the Escalade is what Hennessey uses to promote this high-performance package, John Hennessey assures that any 2015 model that is equipped with the 6.2L V-8 EcoTec3 motor will have the option of having the HPE550 installed including: 2015 GMC Yukon Denali and Yukon Denali XL and 2014-2015 GMC Sierra and Chevrolet Silverado.

If you already own one of these vehicles you can contact Hennessey and have the HPE550 package installed or if you want one turn-key, you can have the performance packaged ordered through participating dealerships. The package will set you back $15, 950 with a 3-year or 36,000-mile warranty. 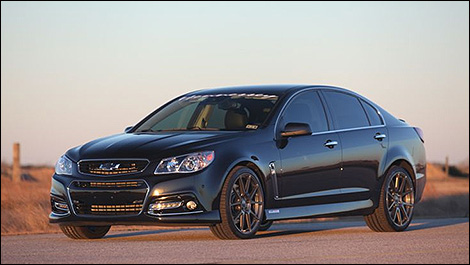 This four door sedan comes stock with a 415hp 6.2L V-8 which makes it an already fun little car to drive. But if you choose to have Hennessey work their magic and put a HPE1000 performance kit on it you will have more than enough power to call your experience fun.

Hennessey starts out with twin turbos, a new intake, headers, a high flow catalytic converter and a new ECU to produce at least 1000hp. To put up with that power they add an up-graded suspension, exhaust, brakes and a choice of a 6-speed manual transmission conversion or a high-performance rebuild with torque converter on your existing automatic.

Hennessey
Hennessey has proven for over 20 years that when it comes to performance and technology they are No. 1 in the industry. They have dealt with GM cars since their beginning and continue to make impressive mile-stones with every vehicle they produce.

But more interesting than the limited edition Z/28 selling out so fast, to help keep rarity of the Z/28s exclusive to the owners who actually shelled out the $75,000.00 for the Camaro, Chevrolet has made a move to prevent the cloning of a Z/28 by restricting the sale of certain parts.

Raging from high-performance parts to cosmetic, Chevrolet sent a list of 35 different parts to dealers that make up the Z/28 package and are not to be sold on the market to individuals or companies that can't prove the ownership of a Camaro Z/28.

Now if it's the power of the Z/28 you are looking for, you can buy the power-plant in the form of a create motor. The 505-horsepower 7.0-liter LS7 V-8 has been available since it was placed in the C6 Corvette ZO6.

It's easy to see why Chevrolet would want to put this plan into motion, but the question is just how long will this plan prevent cloning of Z/28s. The want to clone prestigious cars has been around since hot rodding its self. So even if Chevrolet won't sell these specific parts, aftermarket companies will see an even bigger market to make money. Never the less, no matter how many clones are out there, they can't take away from the authenticity of a real one and numbers don't lie. If you have a true Z/28, 1-of-500 or 1-of-2,500, you still have a significant piece of "Hot Rod History."