In the past week NHRA has sent out letters to licensed NHRA competitors to stop participating in the Street Outlaws reality T.V. show or be banned from the NHRA. There has been NHRA racers that have been a part of the show and other racers that are scheduled to show up on the show in coming episodes. But the NHRA makes it very clear that they do not promote street racing of any kind and if street racing is what you want to do, you can turn in your license and go be a part of it.

I am in my early 30s now, but spent a lot of my early 20s engaging in the dangerous act of street racing in the Detroit Michigan area. I for one know first hand what you see on the Street Outlaw reality T.V. show is very fake, produced, set-up and in some sense it actually makes street racing look less dangerous than it really is. 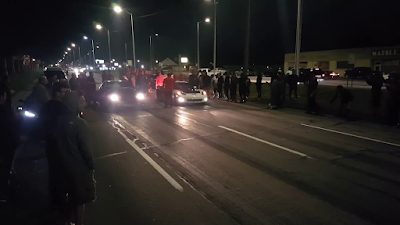 When I talk real street racing, I'm not talking about some back road that has been safely banned for any thru traffic except for T.V. show members and crew. I'm talking about spectators on both sides of the road all the way down to the finish line. Thru traffic always a possible obstacle – potholes, curbs, trees, telephones poles, the unsuspecting drunk driver – all dangers to a driver with a car that in most cases is not fully safety equipped to handle a high-speed wreck.


I would honestly like to say I have never seen anyone injured or killed, but I can't tell you either way. When something bad happens, the automatic reaction for everyone is to get to your vehicle and get the hell out of dodge. Even if a man is trapped inside a burning vehicle, the best thing you can do for him is call 9-1-1 as you are making your getaway. It's sad, but it's true, there's no “No Man Left Behind” when you are engaging in illegal activity.

Another thing that the Street Outlaws Reality T.V. show portrays is the harmless changing hands of money. Sure, when it is all set up for T.V., it's not a problem. But in real life, $3,000-$4,000 is a lot of money to hand over. That kind of money changing hands promotes arguments, fights, brawls, and even murder, that's right, murder. Bruised egos and illegal money sends people over the edge, add in a few drinks, a few puffs on the sweet marijuana, and a crowd of encouraging spectators, it doesn't take much to feel compelled to protect that ego.


I have since hung up my street racing helmet and headed to the track for some safe fun. I encourage everyone to do the same. The Street Outlaws Reality T.V. show is just that, a T.V. show. Real street racing is dangerous to yourself, for the spectators, innocent people who are clueless to what you are doing and on top of it all, if you get caught illegally gambling and racing, say goodbye to your driver license for a while and possible jail time.