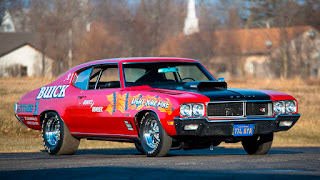 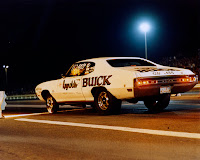 The 1970 Buick GS Stage 2 was going to be produced as a predecessor to the Buick GS Stage 1. The GS Stage 1 was already one of the most-feared muscle cars in the industry and Buick was ready to double up on that fear by creating something bigger and meaner.

Two lucky GS Stage 1 Buicks got the honor of becoming a true Buick Stage 2 prototype. One was a white GSX bought by Reynolds Buick in California, where “Pappy” Kennedy and Jim Bell (Kenne-Bell) tweaked and tested the car and all its after-market parts, and the other was a red 4-speed GS Stage 1 sent to races Doug Jones and Dave Benisek.

Both teams of qualified high-performance Buick engineers/technicians went to work adding the performance upgrades like improved forged TRW pistons, redesigned heads, a valvetrain capable of 7000 rpm, and much more. The whole idea of the Buick Stage 2 prototype was to eventually turn the project into a production off-the-line streetable drag car that could compete in Super Stock classes at the drag strip.

The Myth About The Stage 2

People who don’t know that much about the Buick muscle car era believe that the Buick Stage 2 was a production car. That idea is usually put in people’s heads because at car shows and race events, especially Buick events, people often have their GS Stage 1 Buicks labeled with GS Stage 2 badges.

The Truth About The Stage 2

The truth is the badges are very easy to find and are inexpensive. This is not saying that the parts that replicate the GS Stage 2 Buick 455 cu-in motor aren’t under the hood, but the only originally GS Stage 2 Buicks that exist are the ones that were sent out by Buick to Reynolds Buick and races Doug Jones and Dave Benisek.

Although, with all the hopes and intent in the world of putting this monstrous Buick into production and on the track, Buick was forced to stop the program as stricter pending emissions standards were going to go into effect for sure and the Stage 2 upgrades and horsepower tweaks were never going to pass.

The other reason why the program was going to be let go was that this was not going to be a Central Office Production Ordered Buick like the COPO Camaro, and street safety was becoming an issue. Government organizations like the Department of Transportation were none-to-trilled about the ability to title these drag strip-ready vehicles.

Buying Parts To Turn Your Stage 1 Into A Stage 2

Buick didn’t let the roadblocks get in the way of giving their raced-crazed consumers what they wanted. You could buy a GS Stage 1 Buick and easily purchase all the Stage 2 parts you needed at any Buick dealer around. So although a lot of those Stage 2 Buicks you see out there are for the most part going to be colognes, that doesn’t mean they still can’t pack the punch of the original two Stage 2 Buicks that ran the quarter-mile at a consistent and respectable 10.7s.