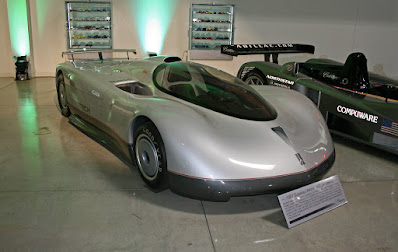 Like with most kids who are fascinated with cars, there is always that one car or vehicle that captures your imagination. Be it a Corvette, Lambo, Ferrari, Monster Truck, low rider, or something else major awesome, there is always one that just makes you want to go fast and look cool. Mine was the 1987 Oldsmobile Aerotech Streamliner.

The spaceship-looking, aerodynamic silver bullet as I called it, made me wonder just how cool and how much faster will cars be when I got old enough to drive.

By the time I was seven, in 1987, my father had already worked for Buick for 20 years give-or-take, so I already knew about the advancements in turbo technology and what it could do for smaller engines. (e.i. Grand National, T-Types, etc.) But it was really the 2.0-liter Aerotech Oldsmobile that put out astonishing recording-breaking speed numbers that made me realize that with the right technology, the sky was really the limit.


Designing And Building The Oldsmobile Aerotech
Oldsmobile and GM knew they had to have three major components to get the Aerotech vision designed, engineered, and ready to hit the track for record-breaking speeds. The first component was they needed a designer/developer. For that, they put their trust in Ed Welburn, Oldsmobile’s Assistant Chief Designer back in the ‘80s and now Vice President of GM Design North America.

The next component they needed was a place to design and build the rendering and the finished products. They choose a basement in one of Oldsmobile studios where they knew they would be out of the prying eyes of the public and even Olds and GM employees that were not to know what was going on.

The third component was choosing a pilot for this spaced ship looking beast, and they choose the best. Since the Aerotech Streamliner was going to be tested at a famous track near Fort Stockton, Texas, Oldsmobile decided to go with a Texas native and one of the best race car drivers of all time, four-time Indianapolis winner, A.J. Foyt.

Structure And Stats
For the chassis, a March 84C carbon fiber kart racer that had already won an Indy 500 was chosen. For the driver, a cockpit that looked more like an F16 fighter jet cockpit was designed with digital instrument panels and HUD technology.

For the powerplant, there were two designed. Both were based on the 2.0-liter Oldsmobile Quad-4 engine. One was boosted by a single turbocharger and pumped out 900-hp, and the other was a twin-turbocharged that pumped out 1,000-hp.

When it came to the body style, Oldsmobile brought in more designers from the GM staff to help design an almost completely aerodynamic, closed cockpit body. Two versions were designed and built: the Long-Tail (LT) and the Short-Tail (ST). Both versions used specially designed automatic adjusting underbody sections to control the distribution of downforce from front to back. 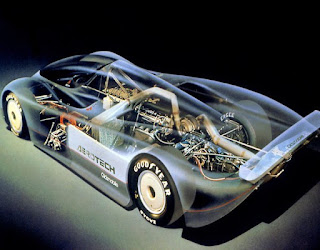 That next adventure would come on December 7-15 1992. The Aerotech Streamliner was brought back to the same Texas track, not to just break one-or-two records, but to break 47-speed endurance records in a short span of eight days with a team of racers and mechanics working day and night.

Funny Thing About The Project
The 1987 Oldsmobile Aerotech Streamliner project was originally designed to get younger buyers interested in Oldsmobiles. Olds even used commercials with slogans in them for their campaign like “Not Your Father’s Olds”.


Unfortunately, the campaign never really took off, and the younger generation still saw the cars as hand-me-downs or grocery-getters. But one thing is for sure, the Oldsmobile Aerotech Streamliner will go down in history as one of the most technically advanced, record-breaking vehicles of its time.