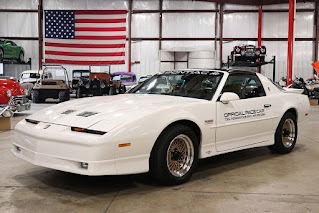 To honor Pontiac's 20 great years of Trans Am success, this rare 1989 Pontiac Trans Am turbo was rewarded by being named the official pace car of the 73rd 1989 Indianapolis 500.

The Back Bone To This Badass Trans Am
Back in the 1980s, production sports cars were considerably slower compared to the fast, technology potent sports cars that are being produced today. Thanks to the shortage of fuel and the bad economy, the '80s were a breeding ground for poorly performing Mustangs, Camaros, Trans Ams, and Corvettes.

But in the late '80s, Buick brought some relief to the unimpressed gear heads with their 1986-'87 Grand National and Regal T-Types. The two very similar models were technically two-door sedans that came with a 3.8-liter six-cylinder engine and used a turbocharger and an intercooler to produce 235-hp and some very impressive quarter-mile time slips. In fact, for those two years, the sluggish-looking grocery-getters were the fastest, most efficient American-made production vehicles that ever rolled off the assembly.

Fastest Trans Am Ever Put Into Production Is Born
In 1989, Pontiac would prepare to celebrate the 20th anniversary of the beloved Trans Am. For the anniversary edition, Pontiac would go in a different direction and for the first time would produce a Trans Am with a V6 motor, the same V6 motor that Buick used for the dominating Grand National and Regal T-Types. For this special anniversary edition, there would be 1,550 Turbo Trans Ams produced in different combinations of hard-tops and t-tops along with a leather or cloth interior option.

Pontiac did not offer a factory convertible Turbo Trans Am, but one was created for Jeff Beitzel the President of PAS, a custom car production company. The car is unique in that its origins were shared with other custom-made vehicles that PAS were involved with building such as the Syclone, the Typhoon, and the ASC-built GNX. The world's only rag-top Turbo Trans Am has changed hands several times and is presently owned by a wealthy Mexican oil baron who loves Pontiacs. 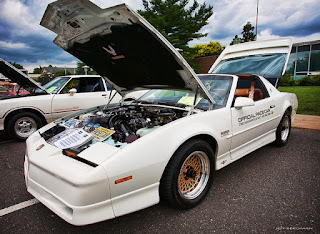 So just what kind of performance stats can this Turbo Trans Am produce? Since Pontiac used the higher-performing drivetrain from the Grand National GNX, they managed to pull 300-hp out of the 3.8-liter six-cylinder engine. You can expect 0-60 times of 4.6 seconds while stopping the clocks in the quarter-mile at an average of 13.4 seconds. And if you keep going with your foot on the gas past the traps, you will reach a top speed of about 158 mph. But just like the Buicks, the possibilities of much faster times and better performance are completely feasible with affordable upgrades and the correct tuning.


Completing The 20th Anniversary Turbo Trans Am Package
To complete the package, the Turbo Trans Am would come with a 200-4R 4-speed transmission with a lock-up converter. Four-wheel disc brakes and aluminum calipers with dual-piston and vented rotors were also installed. The Trans Am suspension includes front MacPherson struts and a limited-slip rear live axle with front and rear torque sway bars – meaning not only does it go fast in a straight line, but it also hugs the corners as well as any other American or European sports car.

The sticker price for this Turbo Trans Am was around $32,000. Nowadays, depending on condition and how many miles are racked up on one, you can find them for sale anywhere from $16,000-$45,000 give or take. Finding one that is cheap and needs some work is extremely hard if not impossible. Most people keep these T/As garage-kept and in great shape.

With only 1,500 produced, the 1989 Pontiac Trans Am turbo is definitely a rare American classic, and if you're lucky enough to own one, it would be in your best interest to take care of it.
Posted by Brian at 3:14 PM