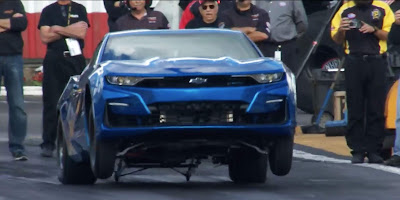 You won’t see this at the drag strip every day, an all-electric eCOPO Camaro beating its original record-breaking quarter-mile times of low 10’s by dipping into the 9’s. It’s an eerie sight to see, a COPO Camaro that usually sounds like a monster do a smokey burnout, a front wheels-up launch, and a 9-second pass without barely making a sound.

The eCOPO Camaro was hitting 10.14’s (give or take) regularly with 80-percent juice being fed to it. No one knows how much juice was being fed to the Camaro when it made its groundbreaking 9-second pass, but whatever the case, the eCOPO stopped the clocks at 9.837-seconds and cross the traps at 134 mph.

The eCOPO Camaro was debuted at the 2018 SEMA show last October. The Camaro uses the same body structure and body design as the standard COPO Camaro that Chevrolet offers to private drag racers and drag racing teams for the NHRA Eliminator class. This electric setup Camaro even uses the same three-speed automatic transmission and solid rear-axle as its sibling COPO.

The setup the eCOPO uses is two electric motors drawing power from four 200-volt modules that are evenly placed throughout the car for even weight distribution. The setup is said to produce an estimated 780 horsepower and 780 pound-feet of torque.


If there is ever an electric drag racing class that comes about, the eCOPO uses an 800-volt charging system for quick turnaround times for round-after-round drag racing. And it is possible, if you look at Indy car racing, they have a very successful Formula E all-electric circuit that runs all year and visits a lot of the famous raceways throughout the US and world.

So is this the future of drag racing? There could possibly be a competitive class or classes that come about in the near future. But let’s face it, the power, the sound, and the thrill of hearing a combustion engine roar through the quarter-mile just won’t ever go away.