Detroit Dragway - Gone But Not Forgotten 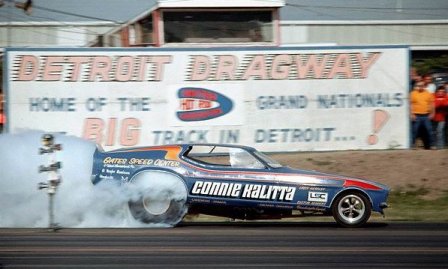 Detroit Dragway was located in the then not so populated Brownstown Township of Michigan just outside of Detroit. This legendary dragstrip opened in 1959 and closed its gates in 1998.

The shutdown was mainly due to two reasons. The first reason was Detroit Dragway needed a renovation, but the proposal to do so was turned down by Township residents in 1994. The extra traffic congestion and noise pollution were not what the now populated upscale Brownstown Township wanted. The other reason for closing down was a lack of business due to a much nicer updated track [Milan Dragway] only about an hour away.

Although Milan Dragway did not in no way have the history that Detroit Dragway had, it did, however, have much-needed safety regulations and creature comforts to attract more racers and spectators on a weekly basis.

"Sunday, Sunday, Sunday at Detroit Dragway", that used to be the catchphrase broadcasted across the radio waves when main events were being promoted. Although by the time I was old enough to go racing with my Dad the real history and charm of the track had already passed on and big NHRA names were no longer showing up. The tracks legendary stories, records, and photos prove that there's no doubt the big time drag racers would always show for the big events, but now it's just history.

In 1959 and 1960, Detroit Dragway hosted the U.S. Nationals for the first time putting them on the map and paving the way to host many more great racing events. Big names like "Big Daddy" Don Garlits, Connie Kalitta (a hometown hero), Shirley Muldowney, the Sox & Martin team, the Ramchargers team, and much more would come to compete and put on a show. 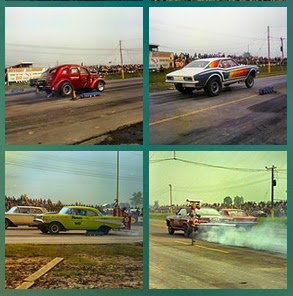 Detroit Dragway: A Dragstrip with a Purpose

Another service Detroit Dragway provided was a place for promotion. “The Big Three” seen the dragstrip as a great place to promote their products. What better place to put their new performance vehicles on display than a racetrack that is right next to the then biggest automobile manufacturing city in the world (The Motor City).

Nothing Stays The Same ForeverThings have changed over the years. Detroit may still be nicknamed “The Motor City”, but it definitely is not the biggest automobile manufacturing city in the world anymore, and by most accounts, it is still broken and struggling.

Street cruising/racing on Telegraph, Outer Dr., and Grand River disappeared in the late ’70s and early ’80s but made a huge comeback in the late '90s and early 2000s. But after a police task force was formed to rid the city of the dangerous pastime and a few heavy-hitting raids cost many of us big fines, suspended driver’s licenses, and all-around big headaches, we mostly stick to drag racing legally and safely now. Although there may be some strays out looking for that kind of trouble still, there's not even enough of them for the Detroit Police Department to keep the street racing task force up and running. 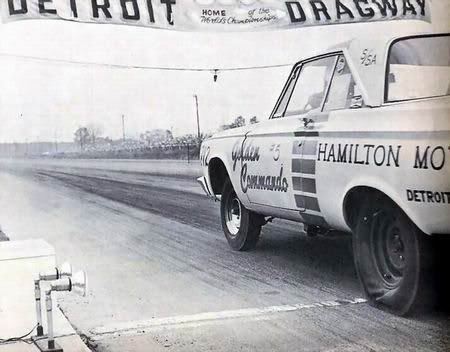 White Knuckle Racing
I did get to race at Detroit Dragway a few times before it was shut down. I was always hearing these stories about a big dip at the end of the track after the finish line, and I'm here to tell you it was there. I don't know if I would say it was dangerous, but it was an eye-opener when you crossed the finish line (hence the need for renovation).

Racing at Detroit Dragway was fun. There was a slight feeling of danger and fear when racing at that track, almost like you were crossing your fingers in hopes that you made it down the track and back to the pits safely. Milan Dragway doesn't really give you that feeling, but that's because the track is up to code and their safety team is 110% awesome.

Nowadays, Milan is where racers from the southeast side of Michigan and beyond go to do their drag racing. I recommend it to anyone, it's a nice facility and a nice place to race. And I can tell you from experience that the price of emissions is a small price to pay as opposed to being caught in an underground drag racing sting.

Gone But Not Forgotten
The once famous Detroit Dragway located at Sibley and Dix in Brownstown Charter Township is now a warehouse facility. Most who live with-in the surrounding high-class neighborhoods don't even know what kind of history was bulldozed down to keep their neighborhoods quiet.

But for those of us who do remember "Sunday, Sunday, Sunday" being shouted out on the oldies rock station, we knew what it meant. We knew that loud and fast cars would be lining up at the gates, then finding their spots in the pits, and eventually funneling into the staging lanes to wait for their chance to compete for a trophy win, bragging rights, and a payout at the Detroit Dragway quarter-mile.

DETROIT DRAGWAY – Just another part of drag racing history gone but not forgotten. 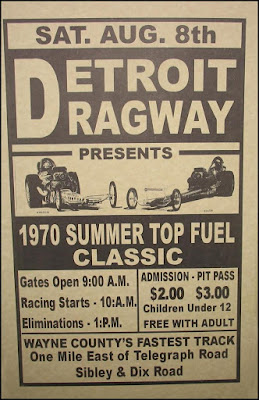