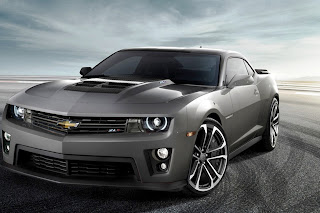 Since 1967, the Camaro has been nothing less than an aggressive sports car that America has grown to know and love. Through the years General Motors has offered an economy efficient basic version for a reasonable price for reasonable people, and also has always offered a hyped up version for those people who want a little bit more out of their Camaro. For the year 2013, GM gives the consumer another set of great choices when choosing what Camaro is best for them, including one of GM's most powerful Camaros ever, the ZL1. Yes, maybe the ZL1 Camaro has a price tag that reaches Corvette prices, but it also has room to fit four people comfortably, trunk space and performance stats to compete with those Corvettes. 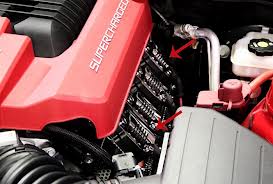 The Camaro holsters an all aluminum 6.2. V-8 with heat-resistant aluminum cylinder heads and a 4-lobed 1.9-liter Eaton intercooled supercharger, all of which helps produce 580-horsepower and 556-lb.ft of torque.

The Camaro will be utilizes a dual mass flywheel and a two disc high performance clutch to transfer the power to either a TREMEC 6-speed manual transmission with a short throw shifter or 6L90 Hydra-Matic automatic transmission. Even though it's a very common thought that stick-shifts are better for performance, the 6L90 automatic is nothing short of a great competitor. The 6L90 implicates an electronic paddle shifting system that helps reduce shift times and has the ability to recognize more aggressive throttling in turn staying in lower gears when someone is trying to have more than just a daily driving experience. Whichever transmission you decide on, you will be getting a transmission specially designed to handle all of the power and torque that is delivered to the tires and wheels in the most efficient way as possible.


Fluid coolers are not something commonly found on your typical sports car. The ZL1 comes standard with a liquid-to-liquid engine cooler and an air-to-oil heat exchanger. The engine, transmission and the differential all benefit from the capabilities of these systems. Keeping all of these components cool under stressful conditions such as racing around a racetrack is vital to consistent performance-packed lap times, lap-after-lap.


GM is one of the first car companies to use Magnetic Ride Control on their vehicles starting with the Corvette. Now the ZL1 will be the first vehicle in North America to be outfitted with the Generation 3 Magnetic Ride Control. The system gives the driver the choice of three different options to be chosen from the cockpit - tour, sport and track. The three different options are designed for optimal control on the roughest roads, extreme comfort for everyday driving, and when you're ready to hit the track and put the ZL1 to the test - the track option will be ready and waiting for the challenge.

Thanks to the Magneto-Rheological fluid system, the shocks provide damping levels up to 1000 times per second which helps with better wheel control through cornering during heavily acceleration and braking. To help prevent active role control and the loss of control, stabilizing bars are placed in the front and in the back, both of which are accompanied with high performance bushings, mounts and dampers.


When it comes to brakes, the ZL1 gets the same treatment as the Corvette. A Brembo brake system is installed that includes 14.6 inch rotors, 6-piston front and four piston rear Monobloc Calipers. It also includes brake cooling ducts that route cool air from the fascia to the rotor and caliper. With this system the driver is able to choose between five different performance settings which are set up for everyday driving, tough racetrack driving and everything in between.

You have two factory wheel options to choose from - black 10 spoke 20 inch rims or chrome 5 spoke 20 inch rims. Those wheels will be wrapped with top of the line Goodyear Eagle F1 Supercar Generation 2 tires. The F1 tires are track tested and ranked as one of the best tires in the world for tread wear, noise reduction, wet handling and mass and roll resistance. 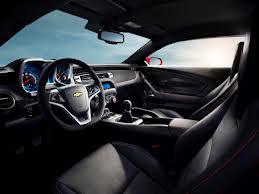 Inside the ZL1, much like the rest of the car has nothing but the best. Seats and door panels are wrapped in leather and suede along with the steering wheel and shifter. The steering wheel has a race car like design sporting a flat bottom and is smaller in diameter then standard to support leg movement while engaged in aggressive shifting.

A 7 inch LCD screen displays the Chevrolet MyLink system. This will give you fingertip access to your Boston Acoustics speaker system, your OnStar Navigation, your wireless Blue Tooth access and mobile apps that include iTunes and Android Market Place. The Chevrolet MyLink also allows you to start your car from here, contact roadside assistance, check diagnostics and get routine maintenance tips and reminders.

For the drivers safety and convenience, a head-up-display will be standard along with a rear-view camera display. The head-up-display also has a conveniently located shift light so that the driver does not have to look down when in race mode to check for anything.


The Camaro not only excels at power and comfort, but GM also takes great pride in its safety. The Camaro is outfitted with an Electronic Stability Control System (Stabliltrak), which has anti-lock brakes and a traction control system with a control module that can since when a driver is in trouble and can make corrections to help prevent the loss of control. A six station air-bad system is implicated to help protect the passenger and driver in the event of an accident. All of this helps give the ZL1 five-star safety ratings in just about every category possible. 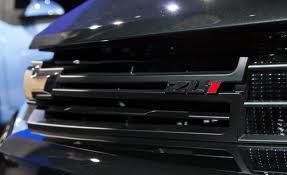 
With great exterior looks and nine different exterior colors to choose from, the Camaro still holds the aggressive sports car look that it was first known for and held on to through the years. With an 9.2 out of 10 overall rating from KBB consumers and a EPA estimated 19 mpg on the highway, the Camaro ZL1 has a MSRP price tag of $54,350.