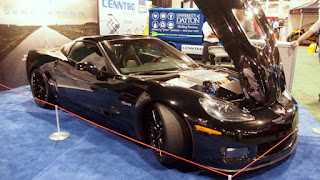 Update
Last year the Genovation Cars company came out with something most people have never seen before -- an all-electric C-6 prototype Corvette. Named the Genovation GXE, this Corvette managed to break the Land Speed Record and the Standing Mile Record.

Well, you may be happy to know Genovation Cars is back at it again. Last week at the Kennedy Space Center Space Shuttle Landing Facility in Merritt Island, Florida, the Genovation GXE Corvette managed to beat the old Land Speed Record of 205 mph by boosting it to a 209 mph, and also broke the Standing Mile Record by hitting 190 mph over the previous 186.8 mph record.

Using two electric motors with one in the front and one in the rear for a 50/50 weight ratio, the motors can put out the equivalent of 700-hp and 650-lb.-ft. of torque. These motors use a 44-kwh battery that can travel up to 150 miles on one charge.

As of now, Genovation Cars get the working electric components from specialized dealers. They then create the software that creates the amazing performance that these electric Corvettes make.

With a now boosted price tag of an estimated $750,000.00, Genovation hopes to be able to have a C7 Grand Sport ready for delivery to costumers as early as 2019. There will be 75 cars in all prepared to order. Each car will have a completely on-off exterior color, different front and rear fascias, a custom interior, and a custom center touchscreen to adjust for the uniqueness of the powertrain.

Although it is a safe bet to say that it will be a very long time, if ever, before we will have to worry about only having a choice of electric power for American sports cars, our taste and wants change quickly from one generation to the next. And government regulation can change a lot of things as well, just look at the sports car era of the late '70s and '80s.

In the past few years, the Tesla motor company has owned the market for fast and effective sporty electric cars. With the Tesla Model S you could reach 60-mph from a stop at the very quick time of 2.8 seconds, and if you kept going you can top out at 155 mph.

But like with any market anywhere there will be competition.

The Genovation eXtreme Electric company has made their own version of an electric sports car out of a Corvette to give the Tesla Model S a run for its money. Boasting a different kind of power, the Electric Corvette is still rated at 700-hp and 600-lb.-ft. of torque. Now that power can help you get 0-60 in 3.0-seconds flat and has hit a proven 186.8-mph top speed with a manual transmission.

Now this Corvette may not be able to make a cool ground pounding sound when you put the peddle to the metal, but you can get 130-miles out of it on one charge. If getting 700-hp out of your Corvette without filling up on gasoline is your style, you should be prepared to shell out about $355,000 for that luxury.
Posted by Brian at 8:05 AM