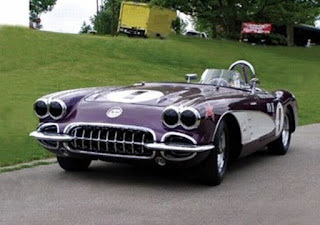 Oddly enough, this Corvette was named after the very odd song - "One Eye, One Horn, Flying Purple People Eater”, a Sheb Wooley hit back in the 50s.

There were two reasons for the paint job and the name for this 1959 Corvette. The idea for the paint job was because the Corvette racing team was having trouble finding their car in the pits and on the track - all the cars looked too similar to one another. Kind of like finding your car in a mall parking lot on the weekend the week before Christmas.

So a standout color scheme was born. The color scheme that was created was a metallic purple for the base color and bright white for the trim and decals. Next, they needed a name for the Corvette, so they decided on the "Purple People Eater". It was kind of a no brainer since the song itself was topping the charts in 1958-59 and the Purple People Eater Corvette was eating up all the competition on the track every single weekend.

Back in the 50s, a lot of racing teams were owned by dealerships and this Corvette team was no different. Nickey Chevrolet in Chicago was the owner of this team and at the time, the largest factory dealership, specializing in high-performance muscle car sales and service. Their parts department functioned as a huge speed shop.

When it came time for the Nickey Chevrolet Race Team to hire a driver and a mechanic, Nickey Chevrolet took some help and advice from none other than the legendary Zora Arkus-Duntov, the Corvette engineer and designer that made Corvette what it is today. Zora suggested they use an aggressive driver named Jim Jeffords and a talented mechanic who was known as the guy who could turn a “Javelin into a competitive race car." Ronnie Kaplan.

The “Purple People Eater” Corvette Eating Up The Competition

The Purple People Eater Corvettes (yes, there were three altogether) raced during the ‘58 and ‘59 seasons. During that time they won the SCCA National B-Production titles and a race at Nassau Speed Week. During the 1959 season, the cars never finished worse than second place in any race, always making the Purple People Eater the car to beat at the track.

Ordering Your Own Corvette With Race Specs

If you ordered a factory Corvette with race specs in the late 1950s, you received a Corvette with heater delete, and a heavy-duty brake and suspension package. 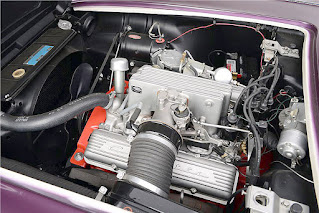 The Corvette came with a 283 Chevrolet V-8 with factory Rochester fuel injection and a four-speed manual transmission, the same way the Purple People Eater was raced. In an interview, Kaplan said "GM helped with some technical advice, and I got that fuel injection figured out pretty quick. It was very reliable. I told Jim to keep that engine about 6,000 rpm, and it never broke. He is a very big, strong man and was tough on equipment. I swear he could break off a shifter."

Where Did The Purple People Eater End Up? 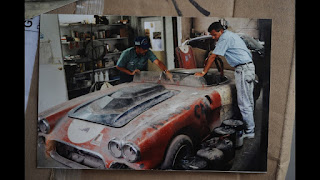 The last one known to exist is the “Purple People Eater MKIII”. It was sold for $800 to a Chip Miller and Ken Heckert, who raced the 1959 Corvette for a short time at Autocross events. Not knowing its future historical significance, it was parked and used as a workbench for a very long time.

After 14 years of being a garage workbench, the sharp eye of car expert/enthusiast Mike Philsbury notices that there were a few things different about some of the parts and options on the car. After some deep research, Mike, Chip, and Ken confirmed that they were eating their lunch every day on the 1959 Corvette “Purple People Eater MKIII”.

The American Heritage Award In 2002

Knowing what they knew, Chip and Ken went to work and restored the Corvette back to its racing form - color and all.

In 2002, the Corvette was awarded the American Heritage Award. Thanks to two guys who just wanted a Corvette to go autocross racing in, and a car enthusiast named Mike Philsbury, the 1959 Corvette “Purple People Eater MKIII” lives on.
Posted by Brian at 8:49 AM