1956 Corvette "The Real McCoy" That Saved the Corvette Brand 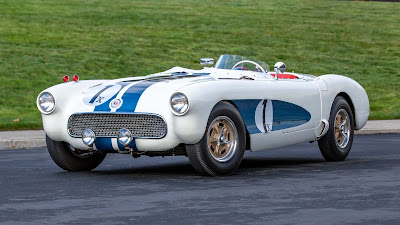 Just about anybody in the world who knows just a little bit about cars knows that the Corvette was the first American sports car and is now the most popular, fastest, and most recognizable American sports car to date. But what a lot of people may not know is that this was not always true. In fact, by the year 1955, the Corvette almost saw extinction.

Rumors about the move to drop the Corvette flooded out of Chevrolet's top offices with very sad sales numbers to back-up what only seemed to be a good idea. Their competition, the two-seater Ford Thunderbird sold an astonishing 16,000 units in 1955 while the Corvette only sold a depressing 700 units.

Unfortunately for Ford, the same car that was taking so many sales away from the Corvette would be the inspiration for keeping the car in the product lineup. The idea behind keeping the Corvette and spending more money on a car that was obviously tanking was brought on by a few Chevrolet big wigs including former Corvette chief engineer Dave McLellan. He released a statement concurring that if the Ford Thunderbird was doing so well that there is obviously a market for a two-seater sports car, and with a solid change for the better and the right amount of marketing the Corvette should be able to become a moneymaker.

In an ironic twist, the very car that Corvette planned to piggyback off of, the Ford Thunderbird, had already made future plans to market the car differently by doing away with the two-seater style and making it a four-seater touring car thus leaving the American sports car market wide open. 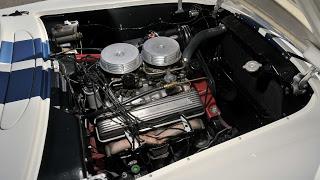 "The Real McCoy"
As wide open as the market was, the Corvette needed some changes for success, ideally in the form of performance and with a new body style. When Corvette chief engineer Zora Arkus Dutov came in, he decided that one thing the Corvette needed to bring to the table to get the public's attention was documented power achievements, but to get that first they had to design a chassis that could handle future horsepower upgrades.

With a '55 chassis, Chevrolet engineers went to work. First, they ditched the boring and heavy two-speed power-glide transmission and replaced it with an up-graded four-speed. They also took the original 265 cu.-in. motor and bored it out to a 307 that sported dual Cater carbs and a now-famous "Dutov high-performance cam."

Many other upgrades were also included. Very rare Halibrand magnesium knock-off wheels, special heavy-duty brakes with cooling scoops, heavy-duty shocks and sway bars, an upgraded high capacity fuel tank, and more were all newly implicated to help achieve what would become some of Chevrolet's most important upgrades for the ‘56 Corvette.

After all of those upgrades, top-engineers slapped a new SR Prototype body on what was now known as project Corvette #6901. The engineers called it "The Real McCoy" and decided it was ready to head to the racetrack.
Dayton Speedway Record
The first stop was at Dayton Speed Week for a two-way flying speed mile. This is where the Corvette would make its first milestone. At the time the record for the Corvettes class was 127mph. With Dutov as the driver, the 255hp Corvette sped to an average speed of 150.58mph to crush the record. This was an extremely sufficient record because it occurred just weeks before the New York Motorama where the Corvette would be on display to many potential buyers, most of which had already heard the news of the record-breaking performance.
12 Hour Sebring Race
A few months later in March, the ground-breaking Corvette made its way to the famous 12 Hour Sebring Race. This was a race that was only made for the toughest of the toughest - the fastest of the fastest. Only cars like Jaguars, Bentleys, and Aston Martins graced the racetracks for these events. But wanting to prove that the Corvette has changed and deserved respect as a truly powerful sports car, Chevrolet did not shy away.

Race drivers John Fitch and Walter Hansgen were brought on board to take on the challenging race. When the green flag dropped the race was on. But early on in the race, the Corvette experienced mechanical problems, so much so they did not think that it would finish. But in the end, not only did it finish, the Corvette finished first in its respected class and 9th over-all. This was an incredible accomplishment especially considering 60 cars entered the event, but only 24 would cross the finish line.

This was another huge milestone and Chevrolet exploited it in printing ads praising the Corvette: "A Tough, Road-Gripping Torpedo On Wheels" and "The Most Remarkable Car Made In America Today."

Those ads were to send a message: Corvette had finally arrived as a force in the international sportscar racing circuits, and Corvette proudly called this particular Vette "The Real McCoy."
Between all of its accomplishments and Chevrolet's ad campaigns, the '56 Corvette sold 3,467 units and in '57 they nearly doubled that with 6,339 sold. One of the main reasons why the Corvette saw such selling success was because if it were to compete in its respected class at the Sebring 12 race, every part that was changed or modified had to be documented and later made available to the public. This made potential buyers very excited about the fact they could buy a Corvette and beef it up to run and look just like the “The Real McCoy”

In any event, if it was not for the #6901 '56 PJ Prototype "Real McCoy" Corvette, and possibly the success of the Thunderbird, Chevrolet may have never gone forward with the Corvette and the automobile industry would definitely not be the same today.
Posted by Brian at 7:14 AM